More “retirees” are working into their 70s and 80s. Here are the surprising statistics on senior employment, and how working late in life affects everything from mood to mortality.

Blanca Almonte retired at age 65 and moved to the West Coast to live with her younger sister. She’d immigrated to the U.S. from Mexico at the age of 12, and gone on to earn a master’s degree in social work. Almonte played a pivotal role in the founding of Family Focus, a Chicago-area nonprofit dedicated to helping the parents of young children.
“We bought a house, got a couple of dogs and did a lot of gardening. But it just wasn’t enough,” Almonte recalls. “It took me a while to figure it out, but I was missing a sense of making a difference.”

After a year of leisure, she went back to work at a California non-profit helping foster kids find their forever homes. Ten years down the road, she is still on the job. The extra money funds home remodeling and travel. Now, at age 75, she enjoys perks like taking Fridays off.

Statistics Point to a Growing Trend

Higher levels of education may be fueling the trend to work later in life. Only 15 percent of men between 60 and 74 had a college degree in 1985, but in 2011, 32 percent did. Figures for women are lower but reflect the same rise. High-status workers tend to be the norm among older Americans; 61 percent of workers ages 62 to 74 in 2009 held doctorates or professional degrees. Only 28 percent of the group had stopped their education after high school.
The hottest demographic in the labor market today are those working into their 70s, 80s and beyond. The Bureau of Labor Statistics reports this will be the fastest-growing group in the near future. For example, the rate of employment among those age 75 and up is expected to more than double from 5 percent in 2002 to 11 percent in 2022. Meanwhile, participation among younger groups is predicted to flat line or even dip.
Perhaps 85 is the new 55; America is embracing 225,000 workers 85 or older in the last 12 months, the highest number on record. In fact, their ranks have doubled since the Great Recession. What sort of work are they doing? Everything from ranchers to crossing guards, salespeople to truckers. They’re not concentrated by race, ethnicity or region, but tend to hold jobs that are less physically demanding.
Below, the occupations of workers who are 85 and above: 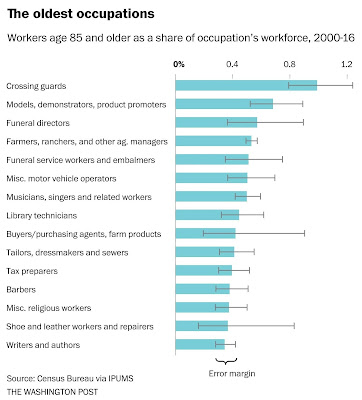 Vice President of EP Wealth Advisors in West Los Angeles Clint Camua remembers one of his clients who worked into her 80s, and two jobs at that.
“She worked as an assistant to a judge from 7 a.m. to 3 or 4 p.m.; then, she would go to the race track and be a security guard, carrying a weapon,” he recalls.

She didn’t need to work, although the financial benefit was huge. Her savings continued to grow until she got sick and moved into an assisted living facility, where she is still socially active at the age of 91.

“People who stay active socially, physically and intellectually have less chance of developing dementia,” said Dr. James Warner, an old-age psychiatrist at Imperial College London. He added that “the biggest single risk factor for becoming depressed in the elderly is social isolation.”

Patrick Thomson, senior program manager from the Center for Ageing Better, agrees. “With extra income, you also delay drawing down on your pension or savings.”

“The meaningfulness and sense of purpose that older people have in their lives are also related to survival,” said Professor Andrew Steptoe, director of the University College London Institute of Epidemiology and Health Care. “The findings raise the intriguing possibility that increasing wellbeing could help to improve physical health.”